Anthony Benedict, is a Compiler Engineer at Celus. He is dedicated and thrilled about innovative technology, especially regarding computer technology. Anthony quickly got a strong member in the Celus team and we are looking forward to more of his inspiring input.

Hi Anthony! It is great, that you found the time to answer some questions about yourself. Could quickly introduce yourself?

Hi! I am Anthony. I work as a Compiler Engineer at Celus. I love technology, music, science and philosophy. I enjoy meeting new people and I am curious about their stories.

My typical workday varies greatly. At Celus we a have unlimited work from home policy. On some days, especially if I want to discuss a lot with my colleagues, I go to the office. On other days I work from home. With such freedom and trust, everyone is encouraged to work in a way that suits them. I typically start my day participating in the developer standup and sorting my schedule for the day. I grab some snacks, turn on my rock music playlist, and work on my algorithms. I take a break whenever I feel like, go outside, and get some fresh air. Most of my work is done in my head and on some days, if I don’t feel productive, I leave earlier to clear my head.

What is the most exciting thing about your job?

The most exciting thing, is the chance to work in state-of-the-art technologies and the elegance of algorithms to solve mathematical problems. I am very interested in high-performance computing and at Celus we deal with challenging engineering problems. I have total freedom to choose how to solve these problems. Everyone here is incredibly talented and very supportive as well. Being honest, it does not feel like “work”, and I am enjoying every day here.‍

What are your hopes for the future of engineering?

I think the future of engineering is incredibly bright.

On the one hand, it just seemed like technology has reached a plateau. For instance, the cars we see everyday look very identical to the ones we had in the 90s. The film “Back to the future” predicted hoverboards and flying cars by the year 2015, which seems quite farfetched now, but seemed to be a quite reasonable thing to expect at that time. Also, we went a bit backward in some cases, for instance, supersonic air travel is no longer possible. These examples might give someone a bleak idea of the progress of engineering and its future.

On the other hand, I feel that in the last few decades, technology has focused on areas that make a big difference. Man did not walk on the surface of the moon since 1969, but the computers we use these days are several thousand times more powerful, than the computer used in the Apollo rocket. Computer technology is the rising water, which lifts all boats in it. An increase in computing power is the driving force behind all modern technologies. The first neural network perceptron was conceived in the year 1958, but neural networks only gained critical attention after Alex Krizhevsky won the Image Recognition challenge in 2012 using his infamous AlexNet neural network.

The rise in computing power also opened new avenues for innovation. I previously worked on simulating Physics in a particle accelerator, which is only possible with high-performance computing. Without the help of computers, such research would be incredibly hard and even on the border to impossible. I think in the future, computers will know even more about the world than we do. People will spend less time on things that they aren’t interested in as they would be automated, rather than focussing on things that require more creativity.

How did your life become connected with computers?

I started learning C programming language when I was 12 years old. After learning for a few months, I wrote a program to find prime numbers from 1 to 1000 and I was fascinated by it. I enjoyed programming micro-controllers. During my bachelor’s, I was deeply interested in image processing. I enjoyed making fun little projects, such as measuring the height of people by taking a photo, object tracking, etc. A couple of years ago, I had the chance to program a high-performance computing cluster and it felt like I had a superpower. I enjoy trying out different programming languages and I can say for sure that programming is the modern-day superpower.

Could you make a quick recording about you playing your favorite song on guitar?

With pleasure. Blackbird by the Beatles is one of my favorite songs of all time.

We heard you like philosophy, who is your favorite philosopher and why?

My favorite philosopher is the Greek philosopher Diogenes. Diogenes is a controversial figure, who gave up possessions and lead a minimal life living and sleeping in a large barrel. He only owned a wooden bowl for water. Then one day on seeing children using their hands cupped to drink water, he gave up even that. If you have heard about Diogenes, then you would have heard about his famous encounter with Alexander the Great. Alexander was intrigued by Diogenes’ philosophy and sought to meet him one day. He saw Diogenes relaxing in a grass field under the gleam of the morning sun. He said to Diogenes that he could ask him any favour and he would fulfill it. Diogenes replied, “Yes, please move away. You are blocking the sun”. Alexander then declared, “If I were not Alexander in this world, then I wish to be Diogenes”. All the wealth and power Alexander had meant nothing for Diogenes. Diogenes had nothing and Alexander had everything. Only one of them felt free. As they say, life is short and there is so much to explore in the world. Sometimes we get carried away with our everyday life and forget our goal in life as a whole. Philosophy helps me to remind myself of what I really want in my life. I am also greatly influenced by Leonardo Da Vinci. He said “Study the science of art. Study the art of science. Learn how to see. Realize that everything connects to everything else” and that resonates with me. 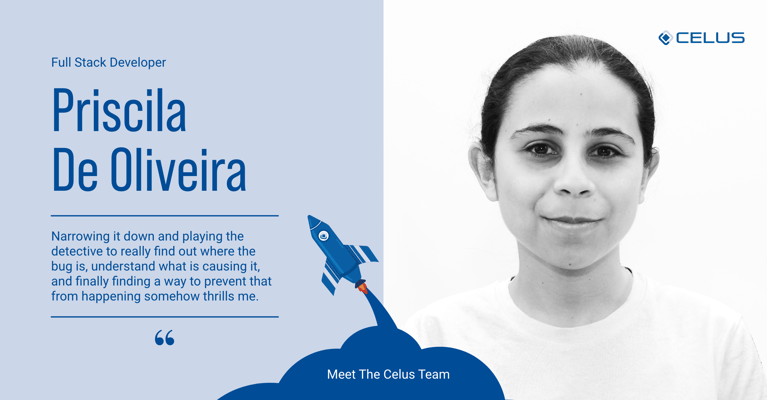 Priscila De Oliveira is a Full Stack Developer at Celus. This means she is able to adapt herself to all different approaches she is facing when she is programming. 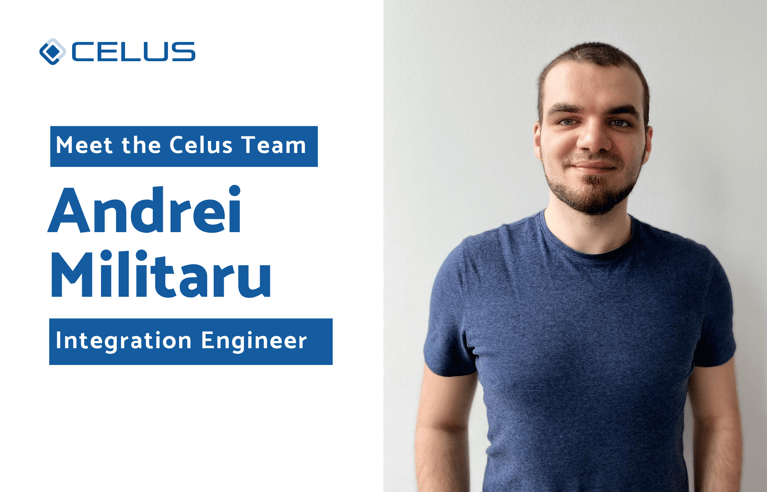 Get to know our Integration Engineer, Andrei Militaru. He took the time to answer some questions and even made a video for us of his hobby!
See All Posts